I Didn't Expect Any Of This

It often bothers me how artists talk about feeling this “great impulse” to get some work out, “kinda like an itch that has to be scratched”. I very much hope that this opening sentence absolves me from ever using these same words. The truth is that for a few years I felt like experimenting with having my own micro-label where to self-publish some of my work in music. Not that any other kind of label has ever published any of my work, but even on the self-publishing world third parties tend to be involved and have a great influence on the final product. This isn’t bad since it allows each person involved in the process to shine in their area of expertise. However, I wanted to try to have more control not only over the audio engineering but also over the production of the physical album and its means of distribution. Mostly because I had very clearly in my mind what I wanted to produce. I had plans for two very specific publications, which would be representative my two most prolific collaborations in music: that with Paulo Alexandre Jorge and that with João Sousa.

Last year I’ve published Not That Different with Paulo, which represents exactly how our music shines the best: as a duo, without much talk before recording - sounds kinda jazzy. This year I’m able to publish I Didn't Expect Any Of This, a representative work of my collaboration with João. 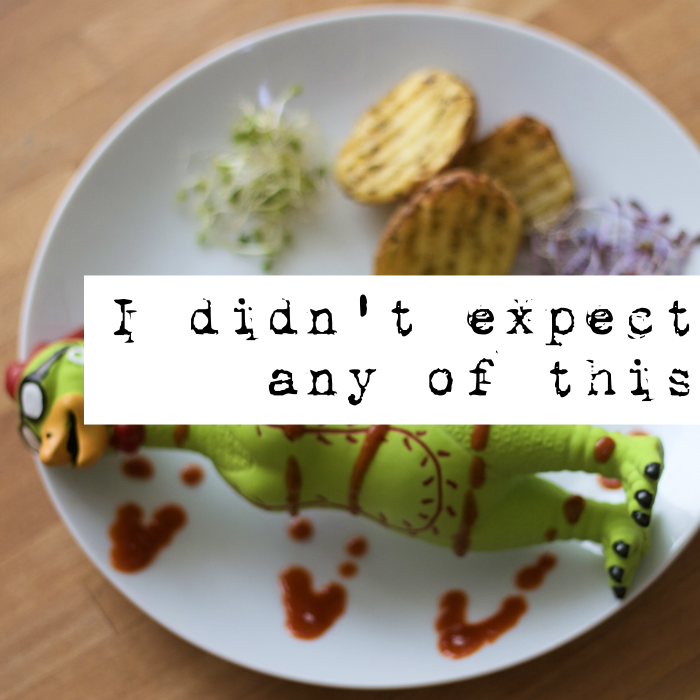 João has been present in my life for about half of it. His younger sister was my middle-school sweetheart and at that time João carried metal chains around his waist and played in underground punk bands. For the next five years, during which we both shared a town, we started creating more and more music. João had launched a musical collective meant to ignite short-lived projects, whose work was distributed in CD-R or displayed in live shows. Under that pretext, we ended up playing together in all kinds of arrangements. Stylistically our music ranged from ska to punk, from experimental to medieval music. Sometimes one played bass and the other one played guitar, sometimes one played drums and the other one composed. In certain projects, we just recorded all manner of sounds and tried to find out how far we could manipulate them digitally.

Following both our moves to other cities, the times when we could join forces and play together started to become scarce. Turning towards improvisational music was therefore not a first choice, but one of happenstance: we found out that given all the hours we had of playing together, we could very easily respond to each other on stage without much preparation and give a solid and eclectic concert. The best example of this was the concert we played at the cathedral of Porto in 2011.

However, our best work together has always been tied with friendship with other performers. Thus, in order to record this album, we were joined by three other great musicians. On the bass, we were joined by André Calvário. André was already a mate of ours back in our hometown, and he became an integral part of the musical collective as a guitarist. When we disbanded to other cities, André took the drum throne of the band A-nimal, where João played guitar and I was fortunate enough to be invited by them to shoot and produce a music video. It wasn’t much of a surprise for me to witness his move to the bass (since it was common in our group for instrumental positions to rotate) nor it was surprising to hear the quality of his bass-playing. What surprised me was how well the language he has developed blended so well with my own drumming and João’s guitar.

On the vocals, we were joined by DV (Filipe Adão). When I met DV he was already an integral part of the label A Besta, created initially to support the production needs of A-nimal. He has starred on the music video I’ve mentioned above, and later on a short film I have yet to finish. DV comes from the world of metal, which unquestionably brings a different colour to our sound, complementing the rock/punk-ish guitars and drums. However his vocal search is not tied only to guttural screams. Instead, he is permanently studying voice control and voice positioning which results in very precise usage of whispers and throaty sounds.

Finally we were also joined by Jorge Nuno. I didn’t actually have the pleasure to meet Jorge before the first recording session for this album, although he had recently played in many gigs with the elements of A Besta in such projects as Uivo Zebra, also featuring João and André. Besides his work with A Besta, he has had a long career in music seemingly parallel to ours, where his noise guitar work stands out the most. In fact, this is what makes it possible to merge the two somewhat similar instruments - two Fender guitars (a Jaguar and a Tele’) hooked to Fender tube amps - in one recording: the drones, feedbacks and generally sustained notes from Jorge are perfectly distinguishable from João’s riffs and provide a background which binds together the whole session.

The final product is a variate collection of tracks. It contains a 30-ish minutes track where four of the five of us participated to improvise a long-form musical narrative, and in contrasts, it also contains a one-minute-ish track with a collage of riffs and rhythms in trio formation. Many more sounds were recorded during the two sessions where we met up, and therefore there are already some plans to release some of these later as a b-sides.

Now the album is out there. You can purchase it digital or physically in Bandcamp, or stream/purchase it in any of the usual digital marketplaces. All the links can be found on its page in the Controlled Flame Records website.